Why collaborative writing is an author’s best weapon 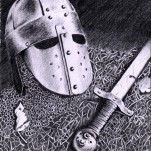 Martin BoltonMartin Bolton was born in Cornwall and now lives and works in Bristol. Previously he concentrated on his artwork and writing small pieces of nonsense for the amusement of his friends, before deciding to do some serious creative writing. His work is inspired by authors such as Robert E Howard, Joe Abercrombie, Bernard Cornwell and Iain M. Banks.

Chuck D and Charles Bukowski are two of the inspirations that got fantasy writer Martin Bolton putting words on the page. In this guest blog he tells us how rap, reading and collaborative projects keep him writing.

When I was nine years old I found a cassette tape lying on the table. It belonged to my older brother. On the inlay card were the words, YO! BUM RUSH THE SHOW – PUBLIC ENEMY. Curious, I placed the cassette in the stereo and pressed play. What I heard changed my life.

“Listening to rap blew my mind. It made me want to write.”

My love of hip hop was sparked by Chuck D’s booming voice and the thunderous production of The Bomb Squad. The following twenty years were spent listening to and writing rap. Looking back, it is clear what really captivated me – it was the words. While some people listened to the beats and the production, I listened to the MCs. The word play, the stories, the rhyme, the rhythm.

Listening to rap was like listening to an audio book, it told a story and gave an insight into another life. It had heroes and villains, characters with whom I empathised and others I despised. It had funny moments, sad moments, and violent moments. It blew my mind. It made me want to write.

First of all I wrote rhymes. Lots of them. I still have a shoe box full of notepads overflowing with lyrics. When a friend asked me if I wanted to get together and write some stuff I jumped at the chance, and we started writing together. Soon I met a DJ and started laying down vocals on beats. I moved to London and continued recording with various producers and DJ’s. Working with other people really inspired me, and my writing was prolific. I was constantly writing new rhymes, at work, on the bus, even waking up at night to write down ideas. I was telling my own story.

It wasn’t until I met David Pilling that I started writing in the more conventional sense. David was writing fantasy short stories at the time, and I admired his knack of writing flowing prose with well built, engaging characters and a fast pace that made his stories easy to read and exciting. He reminded me, for different reasons, of many of my favourite authors. He introduced me to writers like Robert E Howard, H.P. Lovecraft and George MacDonald Fraser, whose work ignited my imagination.

I wrote a parody Cornish news bulletin, mainly for his amusement, and he encouraged me to make it a regular blog. That’s when Kerrier District News squirmed from my brain in all its twisted glory. Although I wrote the whole blog myself, it felt like a collaboration because I came up with most of my ideas whilst chucking ludicrous amounts of lovely beer down my throat with David, talking nonsense and behaving like a noisy shaven monkey.

“Collaborative writing has brought out the best in me in terms of ideas and developing my own style and confidence.”

Even my first short story, an ultra-violent tale about an office massacre, was written after encouragement from Mr. Pilling. He read it and said I was sick in the head, and it wasn’t long before we were concocting a beer fuelled fantasy novel which we eventually called The Best Weapon. We are now working on our third epic fantasy.

Collaborative writing may not be for everyone, but I think it has brought out the best in me in terms of ideas and developing my own style and confidence. I imagine many people never find the right person to work with, if there are too many differences in styles and opinions it isn’t likely to work.

I have been lucky to have bumped into someone who shares many of the same influences and has the same tastes and opinions on literature. Because of that we have a similar style and enjoy each other’s work. I was pleased to read reviews of The Best Weapon that said the writing was seamless and the reader could not tell where one writer stopped and the other began. Even close friends had trouble telling the difference.

I’ve known Simon Evans since I was about four. For many years he has entertained me and my friends with his short stories. He has a unique style – simultaneously emotive, surreal, twisted and hilarious. We occasionally played consequences after imbibing vast quantities of booze with hilarious, well, consequences. We shared a similar sense of humour and he had an eclectic taste in literature, introducing me to authors who have since had a profound influence on my own style, such as Charles Bukowski, Carlos Ruiz Zafon, Hubert Selby Jr. and Jeremy Dyson.

When Simon invited me to join his new exclusive short story club, I jumped at the chance. His idea was for five writers to each write a short story every month and post them together on a blog on the final day. I joined him, his brother Paul, his brother in law Adam Stones and John Pilling (David’s dad) and we posted our first stories on The 900 Club blog in January 2013. We haven’t missed a deadline since.

The experience I have had with The 900 Club has been incredible. Working with five very different writers, reading their work, getting their feedback on mine and discussing what we’ve written is an invaluable experience for me as a writer. I can try out new ideas and get honest opinions on them and I learn a lot from my fellow 900 Club members.

“Collaborating with other writers has kept me motivated and writing.”

Collaborating with other writers, whether it is together on a song or novel or each writing our own short stories for a blog, has kept me motivated and writing. They have boosted my confidence and also given me constructive criticism when needed, and hopefully I’ve done the same for them.

If I’m honest, I’m not sure if I would still be writing regularly now if it wasn’t for them.

So, to all the writers and artists who have influenced and captivated me, especially those I’ve been lucky enough to work with, Cheers!

Check out Bolton and Pilling for the latest fantasy fiction titles from Martin and David. You can read our blog about the 900 Club’s short story challenge and read the latest batch of short stories  on The 900 Club website. Martin has bravely shared his juvenilia! You can read his very first “ultra-violent” short story or read his spoof blog Kerrier District News.

Kickstart your writing routine in 10 minutes.
Write more regularly without fear or guilt. Get the free 5-step plan and kickstart a writing routine that lasts when you sign up for our newsletter.