Writing systems: finding yours, why it matters

Everybody writes differently but one thing’s the same. The writers who have a more balanced, easier and less wrung-out relationship with writing have all developed some kind of personal system to keep them going and to stop them from stalling.

Before lockdown I used to go to the gym. I never really enjoyed it, but I used to go anyway. What made it bearable was doing a few things that passed the time and made it less arduous. For example, I bought some fancy headphones to play techno, I always tried to beat the crowds (I’ve worked from home for years so found this easy) and mixed up my exercise routine to stop me from getting bored.

The things I did were simple and not very imaginative – but they worked for me. They helped me to keep going to the gym even though I didn’t particularly want to. Now I need to develop a system for running outside.

So back to the drawing board…

I’m sharing this with you because writing anything lengthy – in fact doing anything you need to persevere with like exercise – is very similar.

In 2018 we conducted an investigation into the writing habits and practices of academic writers. In total we surveyed and interviewed nearly 700 people – researchers with varying levels of writing experience. We wanted to learn more about how they got their writing done and to see if we could spot patterns to their behaviour:

The human brain craves simplicity – it’s the reason why ‘productivity’ brings back millions of search results promising sure-fire hacks on this or that, magic tips ‘guaranteed’ to transform your life and productivity ‘secrets’ that you can learn – in return for a hefty fee. It’s appealing to think there’s a simple solution but there’s a downside to this approach. Handy one-size-fits-all solutions leads to guilt and disappointment if for whatever reason, you can’t make them work for you.

Our research found that the writers who were the most productive, most happy, least stressed out and better able to cope with the stresses and strains of writing had, over time, all developed a collection of tactics, approaches and routines that helped and supported them to get started and keep going.

They had all developed what we call a personal writing system that was uniquely theirs and fitted with their lives, personalities and preferences.

What kind of things make up a ‘system’?

A writing system combines all the things you do to keep writing day in, day out. Your system can be simple, complicated, quick or quirky. It can involve doing lots of things or just one big thing.

Systems aren’t static either. They can morph over time as your life changes. For some, finding a system that works can be easy. But for many more, it can be hard (tortuous, even). Also, don’t assume that systems come with age or experience either. Writers can struggle at any stage or at any age. Inexperienced writers can find a writing rhythm quickly whilst experienced writers can remain guilt-ridden and blocked for years – and vice versa.

Some writers say they don’t have a writing system or that they’ve never needed one but don’t believe them. When you grill them as we’ve done on numerous occasions it all tumbles out. Either, they’ve made their system so habitual that it has become invisible to them or, spontaneity and a complete lack of structure is their system.

>> Read more: Build a rock solid writing routine with the psychology of habits

So, for example, thinking about my reluctant gym-going former self. Playing loud techno worked for me because it spurred me on. Mixing up my exercise pattern made me less likely to get bored and so, more likely to keep going. Scheduling in my gym time between 10am and 3pm to avoid crowds made me dislike the experience less and wearing fancy headphones even gave me a little reward and made me look forward to going (well, sometimes).

I did these things because I know that I’m the kind of person who likes techno, gets bored quickly and doesn’t much like crowds (and at the time of writing I like crowds even less). The point being that systems are rooted in how well we know ourselves. If you don’t know yourself – you’ll never discover what works.

Finding a system is a mix of approach and attitude. You find your system by being experimental – by trying different tactics and noticing what works – by keeping an open mind and by being willing to throw away approaches that don’t work with no judgement. 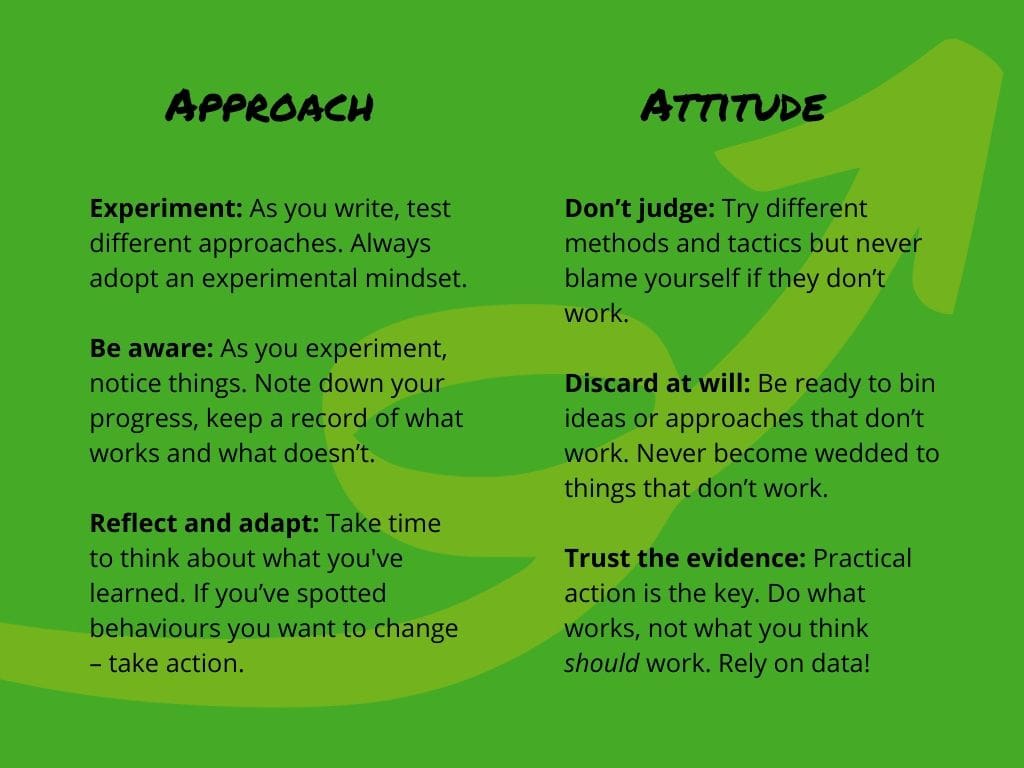 So, applied to writing rather than gym-going, what kind of things could you do to keep going and stop stalling? Here’s four areas you could experiment with. Think about the questions and how you adapt your system as a result:

1. Think about how you manage your time

2. Think about how you set goals and deadlines

3. Think about how you can avoid distraction

4. Think about how you keep going