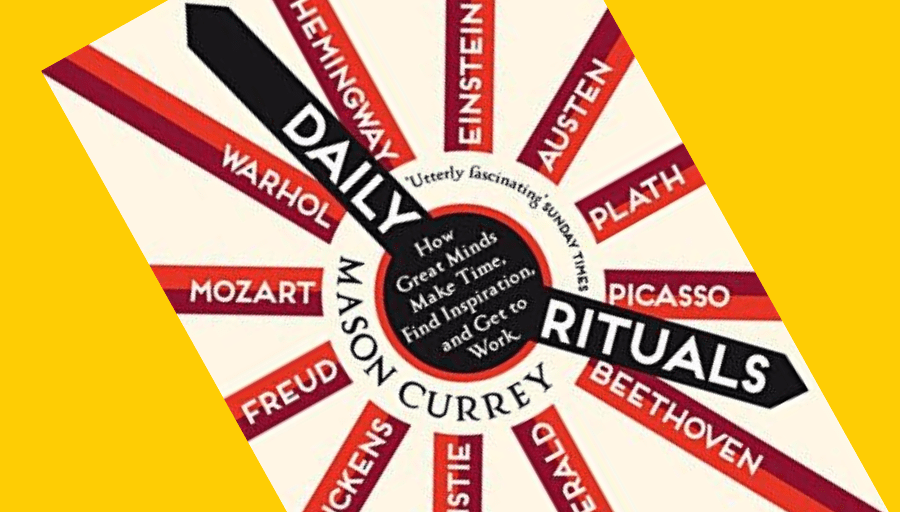 For 18 months, Mason Currey carved out time in his day to write a book about how writers and creatives over the past 100 years have carved out times in the day to do creative work. The result was the best selling Daily Rituals first published in 2013. We ask him to tell us what he learned.

Q. What’s the secret of keep motivated and focused on a (non-paying!) creative pursuit?

Mason Currey: For me, having a deadline—and people who were going to be disappointed or annoyed if I didn’t meet that deadline—was hugely important in staying motivated and focused. In the past, I had attempted some personal writing projects that went nowhere, in part because I was well aware that no one knew or cared if I finished them.

>> Read more: 4 things to learn from the daily rituals of great writers

So I would recommend that writers do whatever they can to put some outside pressure on themselves. That could mean joining a writing group, finishing a magazine assignment (even a non-paying one), or just promising copy to a person whose opinion you respect. The key is to have a firm deadline accompanied by a good dose of fear and anxiety about blowing it.

“many, many great writers only actually wrote for a few hours a day.” Mason Currey, Daily Rituals

It may also be worth keeping in mind that many, many great writers only actually wrote for a few hours a day. As Martin Amis has said, “I think most writers would be very happy with two hours of concentrated work.” I think that’s true. So while it may not be ideal to write around a day job, it is possible. Some writers, like Anthony Trollope, Henry Green, and Wallace Stevens, even found that having a job was a stabilising influence on their work—not to mention the fact that it removed the pressure to earn a living by their writing.

Q. What can people can learn about their own creative habits through reading about the habits of others (and is this just another form of procrastination)?

Mason Currey: Well, certainly this can be a form of procrastination. (It’s one of my favourites!) But I do believe that reading about others’ work practices can be useful—both in terms of borrowing strategies and habits for your own work, and more broadly, in realising that even supposed “creative geniuses” often really struggled with their work on a daily basis.

I think it can be comforting for people to know that they’re not alone in feeling doubtful and apprehensive about their creative process. In fact, that doubtful state may even be necessary for doing meaningful creative work.

“it can be comforting for people to know that they’re not alone in feeling doubtful and apprehensive about their creative process.” Mason Currey, Daily Rituals

Q. What did you learn about yourself?

Mason Currey: I’ve long known that I’m a “morning person”—that I do my best work first thing in the morning, the earlier the better. But before starting this book, I would only get up really early if I had a pressing deadline or was in the midst of a crunch period at work.

Researching the book, however, made me realise that if the early mornings truly are my best work period, I should be taking advantage of them every day, not just when I have a deadline. So now, even though I don’t particularly like to get up so early, I drag myself out of bed at 5:30 a.m. every weekday and try to seize those first couple of hours, when I enjoy extra-strong focus and concentration.

“Researching the book, made me realise that if the early mornings truly are my best work period.” Mason Currey, Daily Rituals

Q. Has technology impacted how people get the work done – how?

Mason Currey: I don’t want to sound like a total Luddite, because I certainly appreciate the many wonderful benefits of the Internet, but all in all I would say that it has hindered people’s creative habits. It’s made it so much harder to have the long stretches of uninterrupted solitary time that are the basis of most creative work. Technology is especially effective at stealing away those periods of boredom and daydreaming that can lead to insights and breakthroughs—now so many of us fill those gaps by checking e-mail or scrolling through our favourite blogs.

So I think contemporary writers and artists need to have more self-discipline than ever, and must be incredibly vigilant about setting aside distraction-free time every day.

Q. Which of the creatives you wrote about do you identify with?

Mason Currey: Honestly, I don’t identify so much with these figures’ actual routines as with the way they talk about their routines. Frequently, in the letters and diary entries I found, there is this certain kind of comically exasperated tone that I can very much relate to—this combination of real distress at the obstacles the writer is trying to surmount, and an awareness of how ridiculous it all is at some level.

Flaubert’s letters are particularly rich in this regard. “Sometimes I don’t understand why my arms don’t drop from my body with fatigue, why my brain doesn’t melt away,” he writes during the composition of Madame Bovary. Or here’s Kafka in 1912: “time is short, my strength is limited, the office is a horror, the apartment is noisy, and if a pleasant, straightforward life is not possible then one must try to wriggle through by subtle manoeuvres.” That’s basically my life motto.

Mason Currey: It’s hard to choose just one. I found that composers tended to have really interesting habits—for instance, that Beethoven would count out exactly 60 coffee beans for his morning cup. Or that Tchaikovsky superstitiously believed in taking a daily walk of precisely two hours in duration, and would refuse to return home even five minutes early. Or that, when he felt blocked, Stravinsky would execute a brief headstand, which, he said, “rests the head and clears the brain.”

Q. Tell us about your own quirky habits.

Mason Currey: I do have one mildly quirky habit. I wrote Daily Rituals book in a drafty, poorly insulated Brooklyn apartment, so I often dressed in a lot of layers. In particular, I got in the habit of wearing this one hooded sweatshirt, with the hood up. And I got so used to it that now I find I can’t write without wearing this sweatshirt with the hood up. The hood acts almost like blinders—it forces me to concentrate only on the screen or page in front of me.

Mason Currey is the author of the books Daily Rituals: How Artists Work and Daily Rituals: Women at Work. In them, he compiled mini-biographies of the day-to-day working lives of more than 300 writers, artists, and other creative minds. He still relishes reading about writers’ and artists’ daily habits and has created a weekly newsletter that shares a new update of a creative person’s working day. Think of the newsletter as slo-mo Daily Rituals, Volume III unfolding in subscribers’ inboxes week by week. Read and subscribe here.