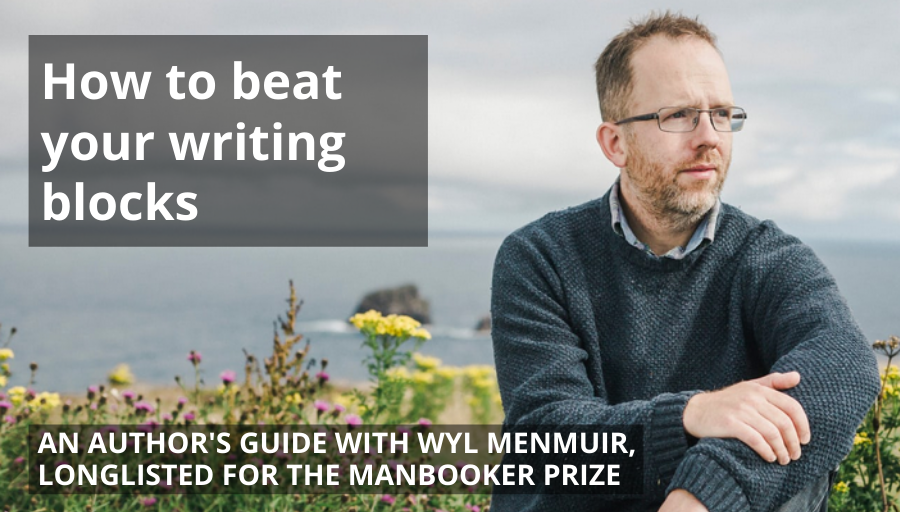 Wyl Menmuir writes novels and short stories. His first novel The Many was long-listed for the ManBooker Prize 2016 – one of the most prestigious writing prizes in the world. In this video, he shares with his top three tips on how to beat writing blocks.

How to beat your writing blocks – Transcript

My first novel The Many was released last year and I’m currently working on a second.

I still have the same doubts and anxieties about my writing but I’ve learned a few things along the way to deal with it – I’d like to help you to do the same.

So here are three tips to help you beat the writing blocks.

Some days, writing can feel like you’re gliding. When the words flow it’s the best feeling. Other days – and perhaps more frequently – it feels like I’m actively going backwards.

The most important thing for me is that I turn up because I know that I’ll find pretty much any excuse not to open my note book and start writing.

Suddenly, I’ll notice that the windows need cleaning and I realise that I couldn’t possibly start writing with dirty windows – only I don’t have a clean sponge so I have to go out and buy one – and before you know it it’s far too late to get started.

I only expect to write a small amount each day: 500 words. Because 500 words – even if it’s 500 words of rubbish – gives me something to work with.

The important thing is that I make some progress each day however little. If you’re serious about finishing your novel or short story find ways to ensure that you turn up.

Having said that about turning up, sometimes staying at your desk is the worst thing you can do – especially if you’re stuck with a problem or you feel that you’ve lost your way.

Whenever I get stuck I remember a tip my editor Nicholas Royle once told me and that it to get up and go out for a walk and talk the problem over – out loud – to myself.

So if you’re stuck – tell yourself the story. Talk to yourself about the problem you have.

Now, I tend to walk where there aren’t many other people around so I don’t freak them out by having to listen to my ramblings – the first few times you do this will feel pretty weird.

But there’s something about the act of talking it over that will help you think in a different way – or at least it does with me.

By the time I get back to my desk, I’ve often either solved that problem or found a new starting point.

Now, only you can write the thing you are writing and you alone – but it doesn’t mean you have to do it without any support.

Many writers I know spend much of their time racked with self doubt – and that makes sense because writing a novel is an uncertain process.

You walk into these fictional woods not knowing what point you will emerge, how long the journey will be, how many wrong turns you’ll take and how many times you’ll have to backtrack.

Other writers tend to understand – so seek them out. Join a writers’ group, have coffee with another writer or share your work at an open-mic night.

When you’re reminded that every writer faces the same anxieties about their work – it makes it so much easier to pick up the pen again.

The important thing is that you keep going. Good luck with whatever you are writing.

Check out Wyl’s other videos

How to finish your novel

How to find writing inspiration

Why I track my writing progress