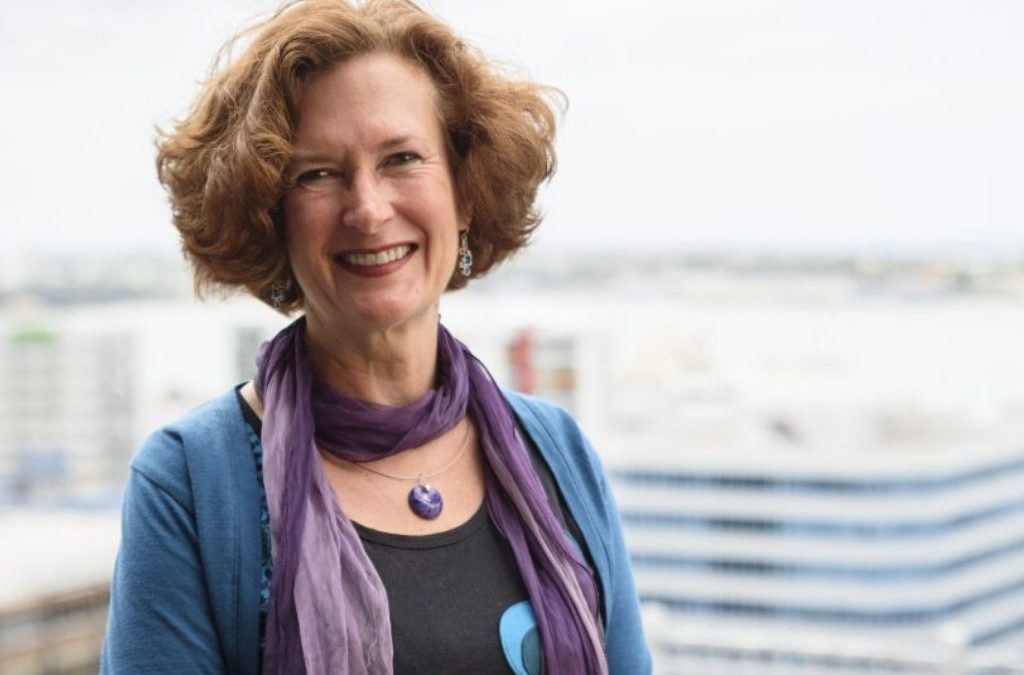 Helen Sword is a guru in scholarly writing circles. She’s spent a decade finding out what makes academic writers tick and publishing evidence-based books and articles about various aspects of scholarly writing and publication. Whilst her research has focused on academics, it applies to any writer wanting to smash their writing goals and strike a more balanced relationship with their productivity.

In Sword’s latest book – a mammoth project taking four years and involving in depth interviews with 100+ scholars – she reveals the tactics and techniques top academic writers use to stay super-productive and publishing.

In this exclusive Q&A interview, we dig into some of these findings and discover how we can all use her advice to keep us productive:

We found many writers self-identifying as ‘binge writers’ but feeling guilty and wanting to write daily. Is binge writing ‘guilt’ something you’ve encountered?

Helen Sword: I don’t regard “binge writing” and “daily writing” as mutually exclusive practices; for example, it’s possible to be a daily writer who sometimes indulges in writing binges or a habitual binge writer who maintains a daily writing schedule at deadline crunch times, and many successful writers are neither bingers nor dailyists.  But there certainly seems to be more guilt attached to so-called bingeing than to other practices, mainly because so many productivity guides (e.g. by Robert Boice, Paul Silvia, Tara Gray) tell us that binge writing is “bad.”

The very word binge suggests hedonistic excess; yet there’s nothing intrinsically wrong with occasional bursts of energetic writing, or what Wendy Belcher delightfully calls ‘writing sprees’.  In my recent article “Write every day: A mantra dismantled” I make an evidence-based case for a more balanced, less Puritanical attitude towards binges, sprees and other non-routine writing. Aspiring writers already have plenty of negative emotions to grapple with, without adding guilt and shame to the mix!

“Aspiring writers already have plenty of negative emotions to grapple with, without adding guilt and shame to the mix!”

Can you name a few non-academic ‘productivity’ books or techniques that scholars should read or use and why?

Helen Sword: It’s really a matter of taste.  One of my key research findings for my recent book Air & Light & Time & Space: How Successful Academics Write was that there’s no one way to be a successful writer; a routine that works well for Stephen King might not work for you, and that’s just fine.  (Nor is King’s brash, breezy style going to appeal to every reader).  I appreciate Mason Currey’s book Daily Rituals because he showcases such a wide variety of authorial habits.

However, most of the people he profiles were certified geniuses – that’s why they’re featured in his book, after all – and many of them were full-time writers or artists, whereas academic and professional writers typically have to shoehorn their writing time into schedules already crowded with meetings, teaching, admin, and other responsibilities.

Most productivity guides are anecdotal rather than research-based and should therefore be read exactly for what they are: one writer’s take on how to be productive.  For example, I love Anne Lamott’s lyricism and humour, but her much-quoted advice about “shitty first drafts” has led many budding authors to think that they must write quickly and badly or else they’re doing something wrong.

Lamott’s approach can be useful for helping “stuck” writers get unstuck, but it shouldn’t be treated as an unbreakable law.  I’ve interviewed many successful writers who write their first drafts very slowly and deliberately, crafting every sentence as they go.

>> Read more: How writing scholars write: tips from the best of the best

Is there anything scholars can learn from creative writers and vice-versa?

Helen Sword: Absolutely!  Many successful academic writers are highly creative in their writing methods, style and techniques, and many best-selling creative writers approach writing as a scholarly task that requires research, revision and peer feedback.  We all learn from each other all the time.  But it’s also important to keep in mind the differences in our circumstances.

If you’re an academic writer juggling research, teaching and service, it makes little sense to judge your daily habits alongside those of someone who writes full-time for a living.  Likewise, if you’re an aspiring novelist who works a demanding day job, you shouldn’t compare your evenings-and-weekends productivity against that of an academic author for whom research is an essential (and paid) part of their professional workload.

Carol Dweck made the distinction between people who display a ‘fixed’ and ‘growth’ mindset – is that something you have witnessed in your interviews with academic writers? Can you train yourself to be less ‘fixed’ and more ‘growth’?

Helen Sword: Virtually all of the successful writers I’ve interviewed cultivate a growth mindset in regard to writing.  They know that there is always something new to learn, and they’re eager to learn it.

Remember that book called No Bad Dogs? The author’s premise was that every dog is a good dog; so-called ‘bad dogs’ just haven’t been properly trained yet. Maybe one day I’ll write a book called No Bad Writers. All writers have the potential to become better writers, so long as they come to that task with a growth mindset and a willingness to take on the challenge.

What kind of pressures do you see early career researchers and writers now face? How have these pressures changed?

Helen Sword: Early career researchers have always faced pressure to ‘publish or perish’.  But there’s no doubt that this pressure has intensified in recent years; in my field of literary studies, for example, there are twice as many PhDs awarded annually but only half as many tenure-track jobs advertised as there were a decade and a half ago, which means that it is now four times harder to land a good job.  That ratchets up the stakes for everyone.

To make matters worse, many early-career academics are still being judged by outdated publication metrics; they’re expected to produce monographs in fields where academic presses are no longer publishing scholarly books and to disseminate their research in specialist journals when they could reach a much wider and more diverse audience through other channels.

I can’t wave a wand and make all those pressures disappear, but I do try to look out for opportunities to challenge unfair performance metrics, subvert academic conventions and push for quality over quantity. I guess you could say that my ‘writing about writing’, which exposes some of the dominant myths around academic writing and publication, is all part of that campaign.

>> Read more: How to develop a publishing strategy and advance your academic career

In terms of their writing, what advice would you give an early career researcher transitioning to a more senior role at a university?

Helen Sword: It depends on the person and the circumstances.  Some senior administrators are quite happy towards the end of their careers to shift their focus from research to governance, which offers them new opportunities for creativity and growth.  Those who really want to keep writing, on the other hand, will find a way somehow, though they may have to develop new strategies for protecting their research time.

In my role as the director of a higher education research centre, for example, I tell my colleagues that I will be fully present in that capacity for approximately 50% of my work week, and I keep regular office hours so that everyone knows where and when they can find me.  The rest of the time I’m off teaching (10%) or researching and writing (40%), which I generally do in libraries, cafes or off-campus as a signal to myself and others that I’m no longer wearing my administrative hat and need to be left alone.

Of course, not every week breaks down quite so neatly; admin and teaching are greedy beasts that like to swallow up more than their fair share of my time.  So at the start of the academic year I also schedule in a few week-long research retreats when I know I’ll be able to go away to focus on my writing and nothing else. (Some people might call that “binge-writing”; I think of it as a writing feast).

Is procrastination a problem for academic writers? (ie. do you really need to read all 27 articles before starting to write?)

Helen Sword: Some academics do need to read all 27 articles before starting to write; I wouldn’t call that procrastination or busy work if it leads to a high-quality written product in the end. But I think that what you’re talking about here is something more serious: chronic avoidance behaviour rooted (most often) in negative emotions about writing. Human beings instinctively avoid doing things that they don’t like doing, things they’re afraid of, things they find uncomfortable.

The successful writers I interviewed don’t necessarily love every aspect of the writing process, but they are drawn back to their desks again and again by their desire to communicate and by the challenge of getting their words exactly right.

“So how do you cure procrastination?  By treating its root cause and not just its symptoms.”

So how do you cure procrastination?  By treating its root cause and not just its symptoms.  A daily or weekly writing routine may push you past your avoidance behaviours for a while, but eventually you’ll get swamped by your negative emotions again, with guilt now added into the mix if you let the routine lapse.

The long-term fix, I believe, is to find ways of associating academic writing with pleasure and enjoyment, so that you won’t be so desperate to find ways of avoiding it. (My books contain lots of strategies for doing this!)

What strategies, tactics or processes do you use to write? What’s your personal system and how did you discover it?

The most important tactic I’ve developed in recent years – based directly on my research findings – is to focus on pleasure first and trust that productivity will follow, rather than the other way around.  Oh, sure, I also schedule writing time into my calendar every week and put accountability mechanisms in place and give myself gold stars when I reach my writing goals and all that other good stuff.  But I’ve learned that no amount of extrinsic motivation will keep me writing productively unless I’m intrinsically motivated as well.

“The most important tactic I’ve developed … is to focus on pleasure first and trust that productivity will follow, rather than the other way around.”

Helen Sword’s latest book Air & Light & Time & Space: How Successful Academics Write is out now. Her other books include The Writer’s Diet: A Guide to Fit Prose (on sentence-level writing); Stylish Academic Writing (on scholarly writing more generally). She has also developed several online resources for academic and professional writers: The Writer’s Diet (an automated feedback tool), the Writing BASE (a diagnostic exercise aimed at increasing productivity) and Zombie Nouns. Sword is also director of the Centre for Learning and Research in Higher Education at the University of Auckland.